Home » News » During celebration of 100th Anniversary of repose of St. Raphael’s of Brooklyn – the Heavenly patron of Brooklyn, St. John Cathedral received the particle of his Holy Relics

During celebration of 100th Anniversary of repose of St. Raphael’s of Brooklyn – the Heavenly patron of Brooklyn, St. John Cathedral received the particle of his Holy Relics 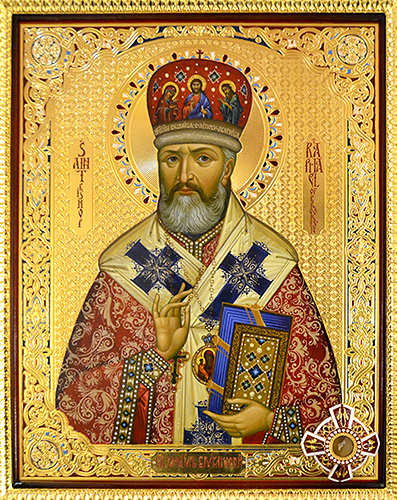 According to blessing of First Hierarch of Russian Orthodox Church Outside of Russia, Metropolitan of East America and New York Hilarion, the celebration of 100th Anniversary of repose of St. Raphael took place in the St. John Cathedral of Brooklyn.

Bishop Raphael (1860, Damascus — 1915, New York) is one of the most venerable Saints of Russian and other Orthodox Churches of America. At the beginning of XX century he was the famous ecclesial and public figure for Brooklyn and for whole USA. The Bishop of Brooklyn was born in Syria; he received theological education in Orthodox school of Halki Island (Greece) and in Kyiv Theological Academy, was a professor of Kazan Theological Academy and Rector of a town church of Moscow. A lot of representatives of different Orthodox cultures were under St. Raphael’s omophorion during his ministry in America.

The celebration of 100th Anniversary of St. Raphael’s repose took place in St. John Cathedral and that is the most joyful thing, because a lot of pilgrims of different nationalities are gathering there for common prayer.

On April 24 of 2015, the celebration was headed by Metropolitan of Eastern America and New York Hilarion. Bishop Jerome, Archpriest Alexander Belya (Rector of the Cathedral and Dean of New York), Archpriest Thomas Zein (the ecclesiarch of Antiochian Cathedral of St. Nicolas in Brooklyn), Archpriest George Kallaur (Rector of Church of the Mother of God «Unexpected Joy», Staten Island, NY), Archpriest Mark Burachek (Rector of Our Lady of Kazan Church, Newark, NJ), Hieromonk Photius (Oulanov) (Clergyman of Church of the Intercession of the Holy Virgin & St. Sergius, Glen Cove, NY), Hieromonk Tikhon (Gayfudinov) (the assistant to Metropolitan Hilarion), Deacon Petr Utkin (Clergyman of the Cathedral) and Deacon George Temidis (Member of Diocesan Council) celebrated together with His Eminence.

For such special occasion monks Kyiv-Pechersk Lavra painted the icon of St. Raphael of Brooklyn and it was placed in the middle of the Cathedral. The celebration itself had started from the moment when Metropolitan consecrated that icon.

After consecration the Akathist to St. Raphael of Brooklyn was read on two languages: Church Slavonic and English, accompanied by a beautiful singing of the choir of the Cathedral.

At the end of prayer service, Hieromonk Photius (Oulanov), PhD, professor of New York University, made the scientific report «Life, activity and value of St. Raphael», for attention of clergy, parishioners and guests of the Cathedral.

The celebration was concluded by a festive supper, where clergy shared their spiritual joy on that particular event, realizing that this was just a beginning of festivity.

On May 2, in the feast of Translation of the relics of St. Matrona of Moscow, St. John Cathedral of ROCOR received a particle of holy relics of St. Raphael of Brooklyn. That became possible according to blessing of Primate of Antiochian Orthodox Christian Archdiocese of North America, Archbishop of New York, Metropolitan of all North America Joseph; it was a response to the request of Rector, churchwarden and parishioners of Cathedral. The shrine was brought by representative of Antiochian Orthodox Church, the Ecclesiarch of Antiochian Cathedral of St. Nicolas in Brooklyn Archpriest Thomas Zein. It should be noted that St. Raphael of Brooklyn is the founder of that church.

On May 3, in St. John Cathedral of Brooklyn took place a conclusive part of celebrations dedicated of 100th Anniversary of St. Raphael’s repose.

That day the particle of St. Raphael’s relics already was in the Cathedral. Because of that a lot of pilgrims from different parts of the city gathered in the church in order to venerate such shrine.

The Divine Liturgy was headed by First Hierarch of Russian Orthodox Church Outside of Russia, Metropolitan of Eastern America and New York Hilarion.

When Metropolitan arrived to the church, Rector of the Cathedral, Archpriest Alexander Belya addressed a welcoming speech, where he expressed his gratitude to First Hierarch for blessing to implement celebrations, noting the successful performance of arrangements by God’s grace and the prayers of Saint Raphael, whose relics now also are in the Cathedral of Brooklyn. Also father Dean shared his spiritual joy on the occasion of the arrival of the Bishop, together with the clergy of the Metropolitan Synod.

Festive service was easy and spiritually joyful; clergy noted it after the Liturgy.

At the end of the service First Hierarch of ROCOR greeted everyone with the celebration and thanked all those who took part in the anniversary celebrations – the Rector, churchwarden, clergy, choir, parishioners and guests of St. John the Forerunner Cathedral of Brooklyn. 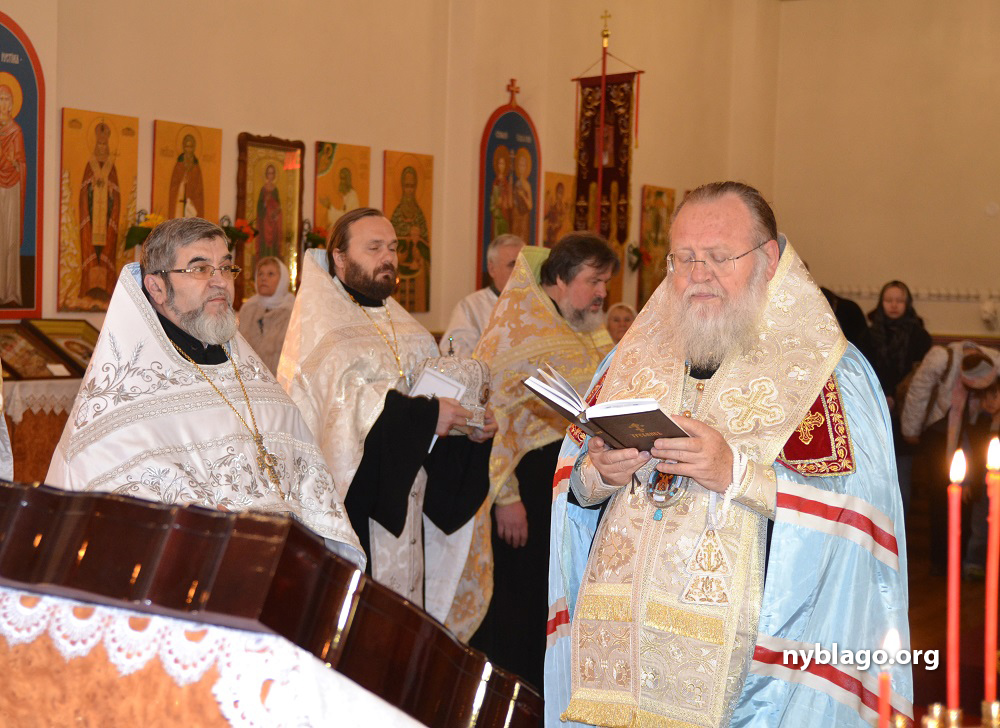 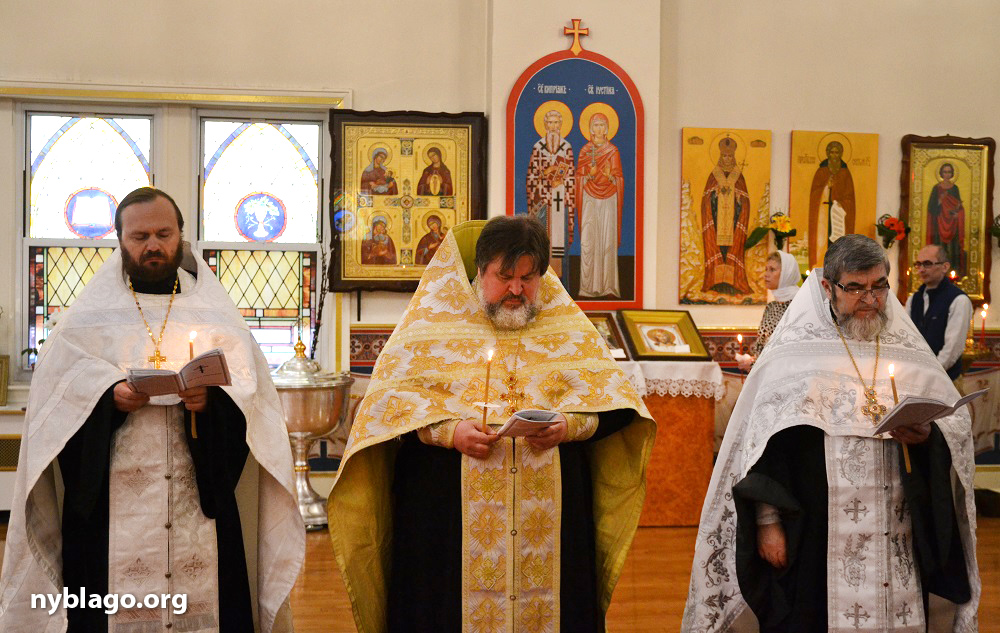 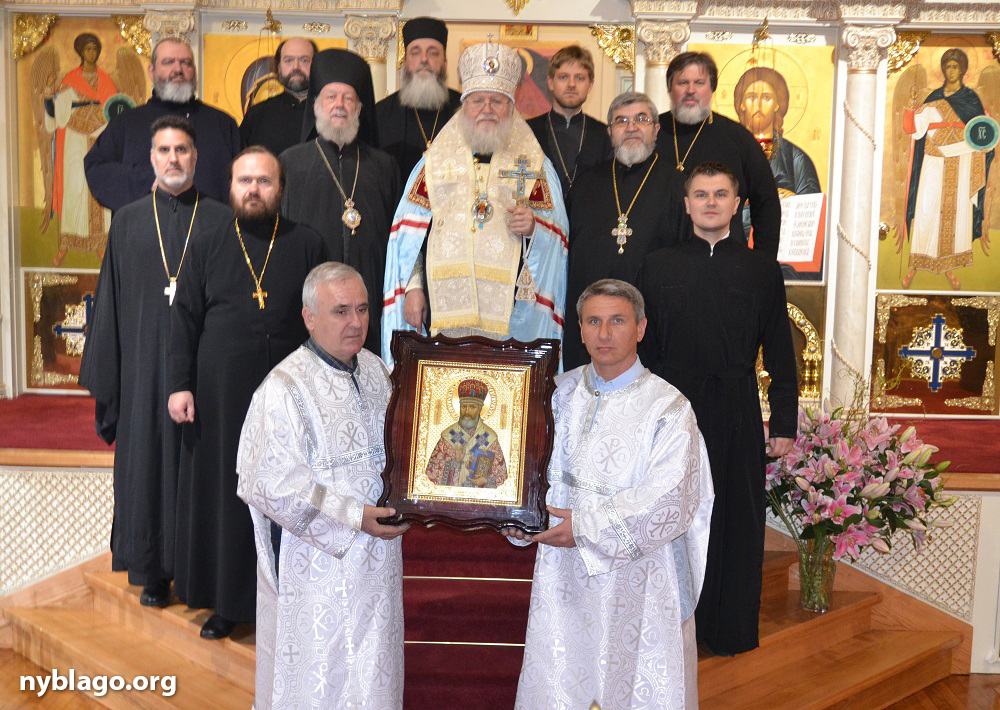 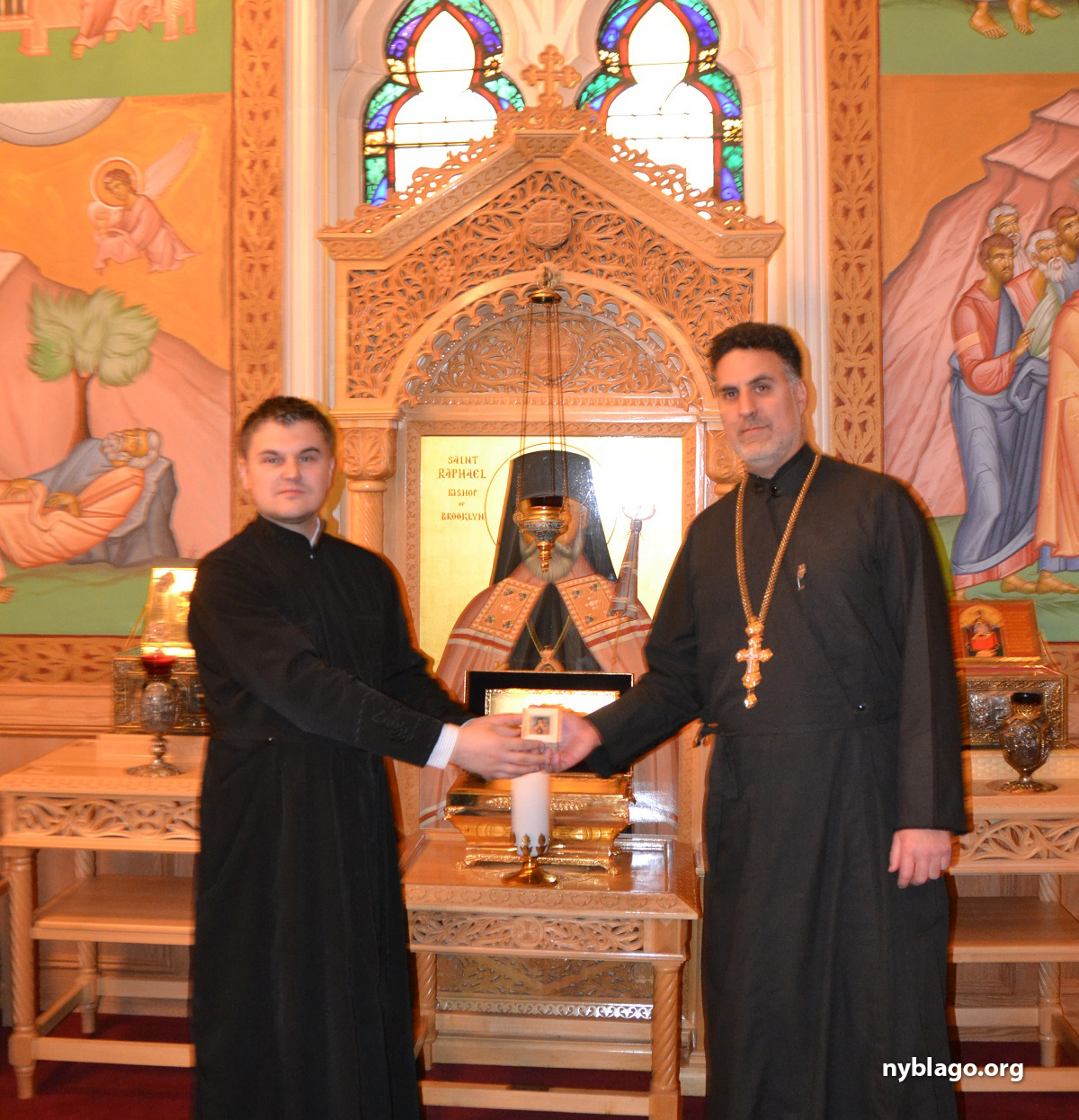 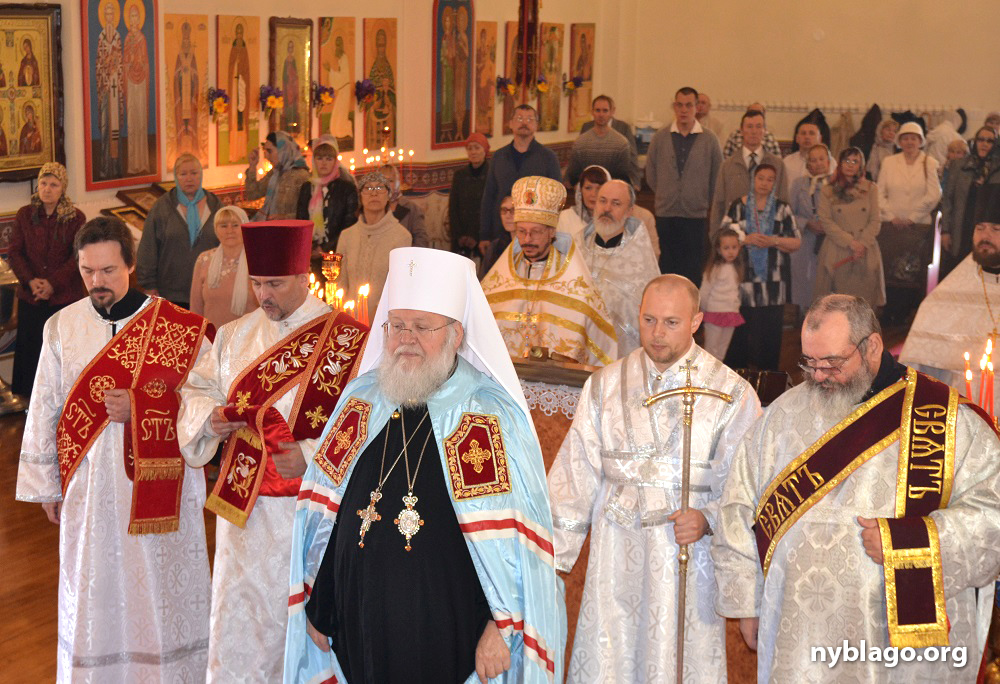 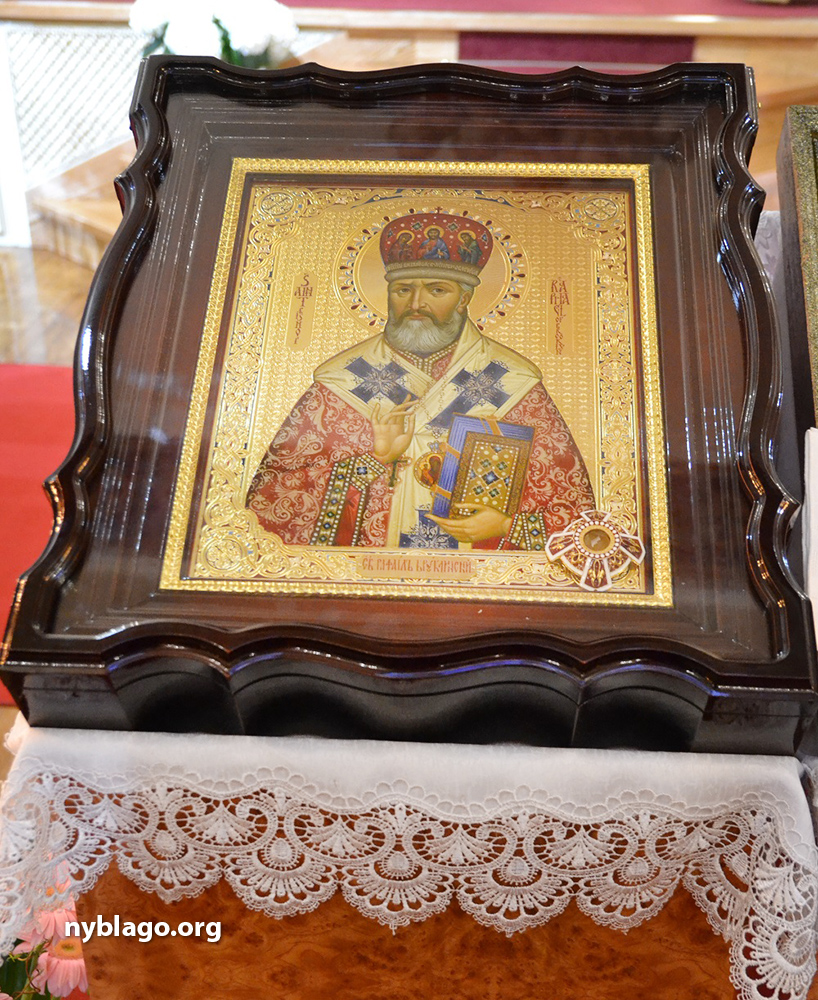 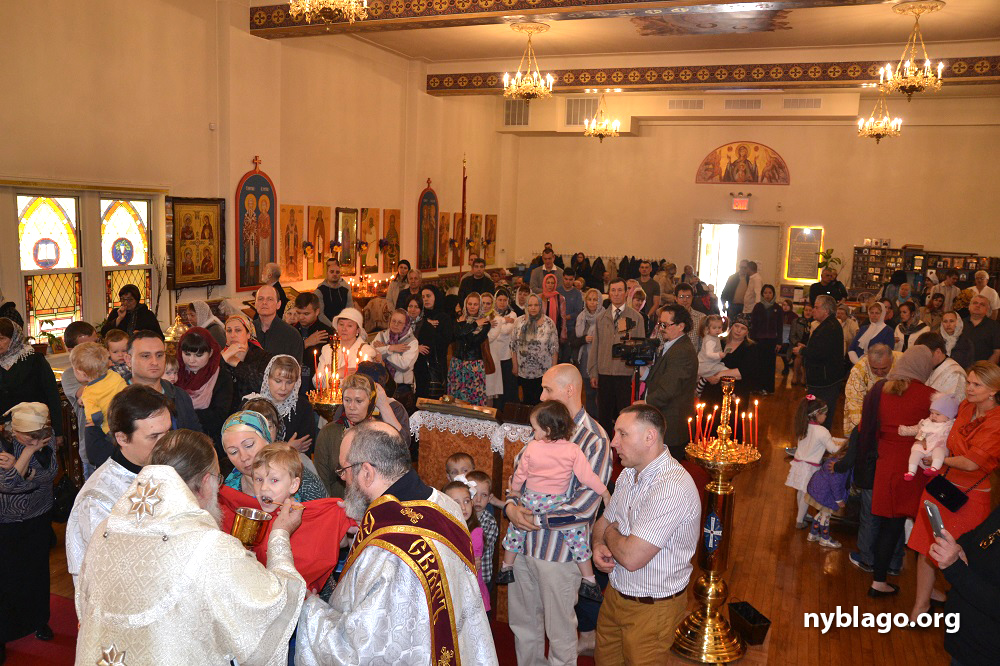 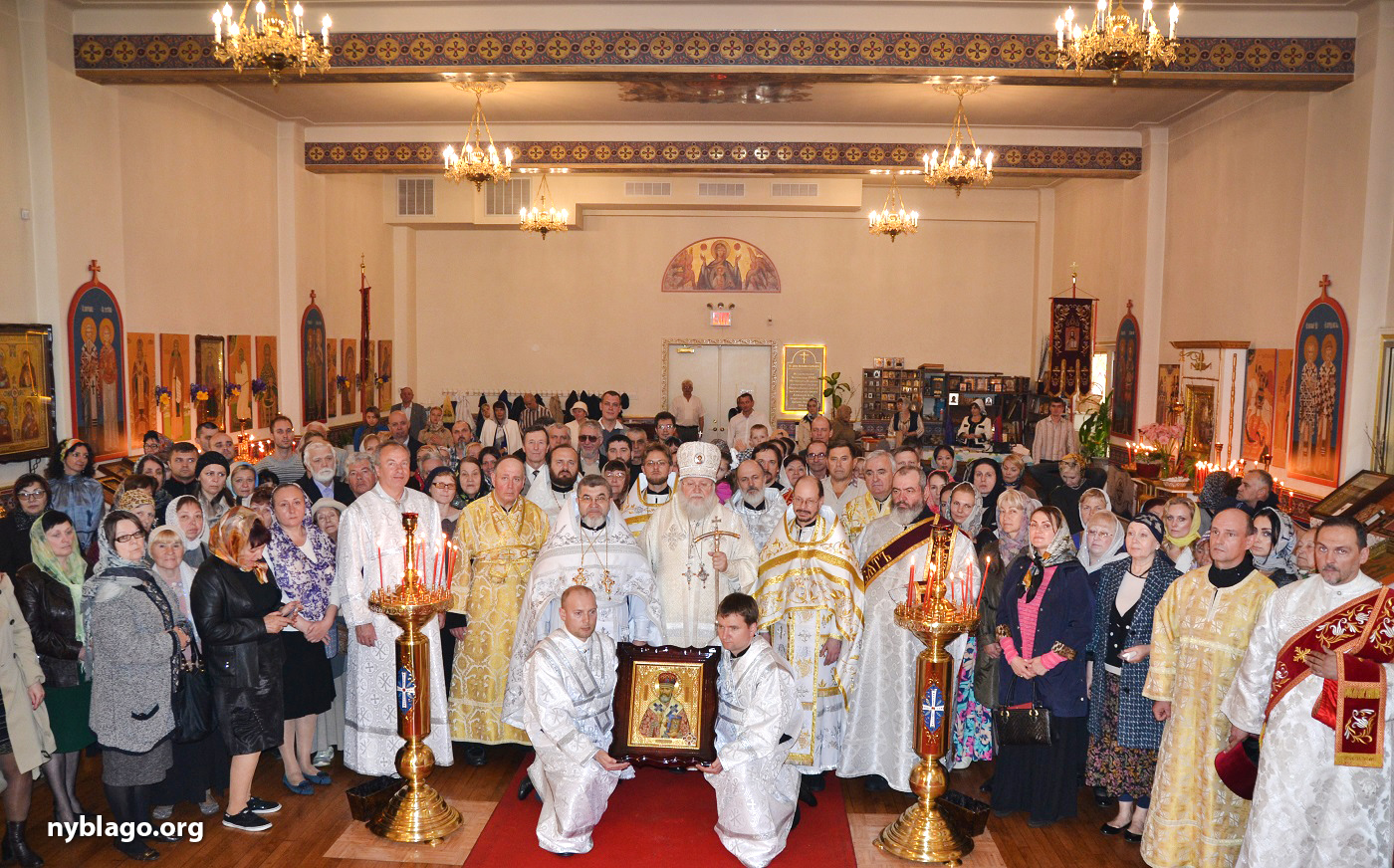 During celebration of 100th Anniversary of repose of St. Raphael’s of Brooklyn – the Heavenly patron of Brooklyn, St. John Cathedral received the particle of his Holy Relics обновлено: February 16, 2016 автором: maximus