Saint Herman of Alaska – The Enlightener of America 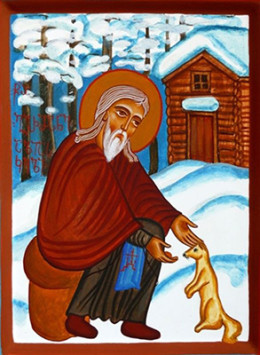 Saint Herman of Alaska is considered to be the patron of America. The Day of his Remembrance is on 9 August.He was born in 1751 (or in 1756) in the family of Russian merchants. There are two versions about the place of his birth: Moscow Governorate or Voronezh region. Being sixteen years old Herman has come to the St. Trinity Hermitage, and started to carry some different obediences. After few years, looking for solitude, the young man went to Valaam. There he met elderly monk Nazarius from the Sarov monastery and who became Herman’s spiritual father.

After fifteen years in 1793 together with some other monks he was sent to Kodiak mission, which was found for the preaching of the Gospel to the pagan peoples of Alaska.

The conditions for missionary obedience were very severe. In 1807 St. Herman was assigned to be the Head of the Mission.

After some time, St. Herman moved to one of nearby island named “Spruce”. That island St. Herman renamed to “New Valaam”. Making many labors there St. Herman predicted his death and passed away on December 1836.

Venerable father Herman spread the Orthodoxy in Alaska very much. He baptized many thousands of Aleutians people and other people of Russian America. It became possible, thanking to St. Herman’s personal vital example, because his life was self-sacrificial. He had bright ideas, clarity of thoughts and sober judgment.

After the blissful decease of St. Herman his body was buried on his island. That place became the place of pilgrimage soon enough.

Herman of Alaska was glorified as a saint by the Synod of Bishops in 1969. After one year the holy relics of St. Herman were opened and he was canonized. In the same year the Holy Synod of Russian Orthodox Church included the name of St. Herman to the Church calendar and called him “The Wonderworker of All America”.

Today the holy relics of St. Herman of Alaska are in the Church of Resurrection in Kodiak (AK, USA).