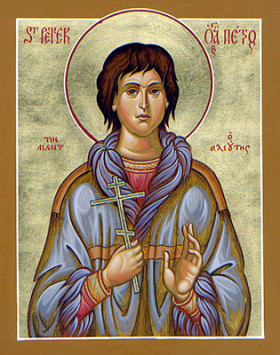 The feast day of St. Martyr Peter the Aleut is on 24 September.

There is not much data about St. Peter’s life. His place of birth and origin are unknown for certain. There is assumption that Cungagnaq (the name before he was baptized) was born on Kodiak Island. In that time it was the territory of Russian America. The majority of residential population was Aleuts, so Russians called all local peoples like that.

It should be remembered that since the XVIII century the Kodiak spiritual mission had successfully operated on these islands. Presumably the future saint was one of pupils of St. Herman of Alaska and was baptized with the name Peter.

St. Peter the Aleut finished his life martyr. It happened like this. In 1812, 80 km away from San Francisco (North CA), in a strategically advantageous location, Russian founded a settlement called Fort Ross. There worked a company engaged in the hunting of marine animals. That place also came to the attention of the Spanish colonizers. In 1815, near the settlement worked the group of 14 Aleuts. In bad weather their boat approached to the bay of San Pedro, where they were captured by the Spanish military.

According to one version that prisoners were passed to Jesuits, another – to Franciscans. The Catholic monks attempted to force the Aleuts to convert to Roman Catholicism. But Aleuts showed their baptismal crosses and said that they were Christians already and did not want to have another faith. So captives were imprisoned in pair and been tortured without food and water. St. Peter was taken into custody with another Aleut John Kiglay who became a witness of St. Peter’s martyrdom.

On the next day all prisoners were moved to other place and after that were saved.

In 1819 Kiglay escaped from the captivity and came to New Archangel. His tale about St. Peter’s martyrdom was retold to St. Herman who stood up, putted the sign of the cross upon himself and said: “Saint Peter the New-Martyr, pray to God for us”!

There are several churches dedicated to honor of St. Peter on North-American continent.