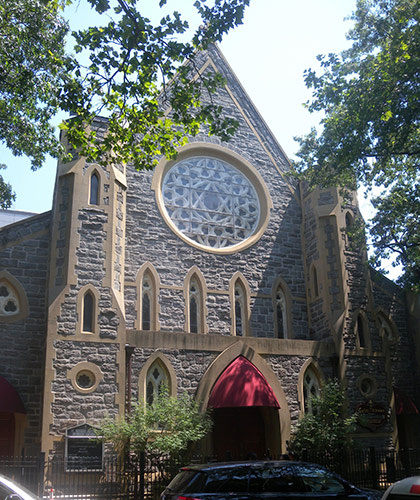 In 1890s Arabic-speaking Orthodox Christians from Near East, who lived in New York, created the Beneficial Syrian Orthodox Association. At that time the Church on the Continent was ruled by Russian Orthodox Church. Members of Association requested Church authorities to elect a mentor for their people, the one who would be able to speak their language and celebrate according to their tradition.

For that ministry Archimandrite Raphael (Hawaweeny) was elected; at that moment he studied in Russia. He was summoned to New York and after consulting with Holy Synods of the Russian and Antioch Churches he arrived to America on November of 1895.

The building on 77 Washington Street in Manhattan was transformed into the first church for Arabic-speaking Orthodox believers and father Raphael became the minister for their needs.

The parish outgrown their small church in Manhattan and in 1902 purchased the building at 301-303 Pacific Street in Brooklyn, where was created a large Arabic-speaking community. The church was consecrated by bishop Tikhon (later on he became a Patriarch of All Russia) and dedicated to St. Nicolas, the bishop of Myra, Lycia. On March of 1904 the Primate of Russian Church in North America Tikhon got a vicar bishop. That was Archimandrite Paphael – the spiritual leader of Syrian Mission of Russian Orthodox Church in North America. Bishop Raphael received a title «the Bishop of Brooklyn». St. Nicolas church got a status of Cathedral. 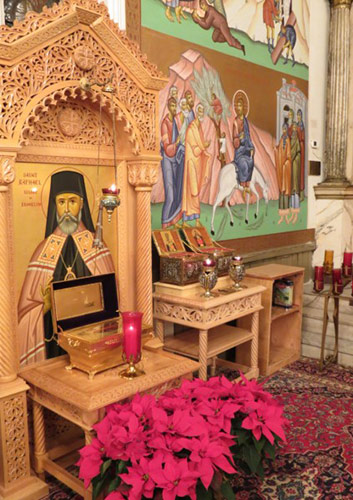 Bishop Raphael carried his ministry with a great dignity and for next years he added thirty parishes to his Mission. He was a founder of publishing house «Al-Kalimat» (The Word) and introduced the truths of Orthodoxy to readers.

The building of the cathedral was fully acquired from the Episcopal Church in 1920 and by efforts of parishioners gained the form of an Orthodox church.

On May 29 of 2000, in St. Tikhon monastery (the place which Holy Hierarch helped to consecrate years ago), South Canaan, PA, Bishop Rafael was glorified among the Saints of Holy Orthodox Church of America. A lot of parishioners of St Nicolas Cathedral – the first community, created by St. Raphael, made a pilgrimage to St. Tikhon monastery for such festive and memorable event.

At the same year in St. Nicolas Cathedral was placed chasse with the relics of St. Raphael and the hand-painted icon of him. Those shrines permanently are in the Cathedral.