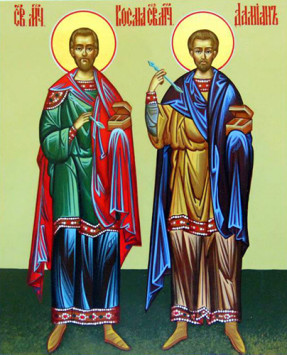 “We heal sicknesses not by our power, but by power of Christ – the True God”.

The Festive Day of saints Cosmas and Damian is on 14 July.

Cosmas and Damian are brothers and were born in pious Christian family in Rome in III century. They lived in an era of brutal persecution of Christians by the pagans. The life of saints is an example of use by God- given talent for the service to God and to people. Cosmas and Damian received medical education and had a success on it. They healed people by their faith and never got pay for that. At the same time brothers the unmercenaries preached word of God to people and explained that they heal not by their power, but by power of Jesus Christ. Saints called for believe to God, because it may open the way to true healing and that is the salvation of souls.

Cosmas and Damian had suffered from envying people who calumniated on them. When healers appeared before the Emperor, he demanded them to venerate pagan gods and to renounce Christ. Saints refused and Carinus began to intimidate them by tortures. Then Cosmas and Damian started to pray to God for Emperor to make him listen to reason. So, Emperor’s neck was bent and he couldn’t turn his head. Carinus and those present were scared. The Emperor repented in his deeds, confessed his faith to Christ and was healed immediately.

Being dismissed Cosmas and Damian came back home to suburb of Rome and continued to heal people for free, turning them to God.

The life of saint physicians was ended by the hands of their teacher who envied to glory of his pupils. Pretending that he goes to pick some medicinal herbs the old physician decoyed brothers to mountains and murdered them. Then he threw corpses into a river. This event took place in 284.

After death God glorified Cosmas and Damian by greater miracles.