St. John of and San Francisco Shanghai – the holy hierarch of ROCOR

St. John of and San Francisco Shanghai (Mikhail Maximovitch is the name of future Archbishop) was born in 1896 to the family of faithful nobles in the village of Adamovka (today this is Donetsk region, Ukraine). St. John of Tobolsk was his forefather on paternal line. From an early age he loved prayer, reading the life stories of the saints and collecting Orthodox books and icons.

During the time of cruel persecutions in the Soviet Union, Mikhail moved to Beograd where he received theological education. In 1926 he was tonsured to a monk with the name of John. After few years John the monk was ordained to priesthood, becoming hieromonk. Already at that time contemporaries revered father John for the righteous. He always prayed, diligently fasted and every single day celebrated the Divine Liturgy. Fr. John’s life resembled to life of great ascetic of the Church because since being tonsured he never lied down. This holy man was strong in faith, strict to himself, gentle and kind to people.

In 1934 hieromonk John was ordained to episcopacy and moved to Shanghai – the place of his ministry. Young bishop visited hospitals for every day, hearing confessions and giving the Holy Communion for those who were there. Many incurable patients were healed thanking to Bishop John’s prayers more than once.

Since 1951 Bishop John was governing Archdiocese of ROCOR in Western Europe. 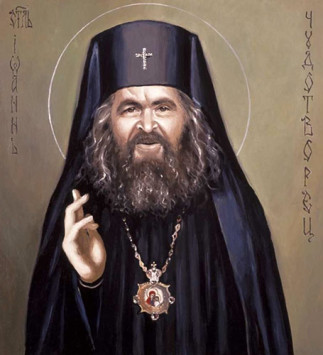 He actively fulfilled missionary work in Europe and after in USA. It was really fruitful because his kerygma was based on his personal prayerful example. St. John spoke several languages which allowed him to convert to the Orthodoxy many French, Dutch and people from other countries.

Bishop John became well-known by the Orthodox people as well by non-Orthodox. In Paris he was called “St. John the Barefoot” because he was able to heal a man by his blessing, wearing old monastic robe and having no shoes. Bishop John has been called to a many hospitals of Europe where he could pray for dying persons all night long and no matter of religion.

Holy Hierarch received the revelations from God and often came to people who needed prayerful support and he rescued from a misfortunes to come.

In 1962 the Bishop arrived to American land for his ministry and in 1963 he became the Archbishop of Western America and San Francisco.

Last years of his life the Holy Hierarch had many sorrows from people who slandered, envied and persecuted him. Sometimes even in the court.

Like many righteous before him, St. John received the revelation from God about his last day. It happened in 1966 when Holy Hierarch brought to Seattle the wonderworking icon of Theotokos of the Sign. St. John died in a front of the main shrine of ROCOR. That news made sad many people around the world.

The burial service took place on 7 July in the Cathedral of honor of the icon “Joy of All Who Sorrow”, San Francisco. Believers cried, seeing off the last journey of the Archbishop. Soon near his grave became to happen healings and help in vital troubles.

St. John was canonized in 1994. The Day of his Remembrance is 2 July and 12 October (finding of the holy relics).