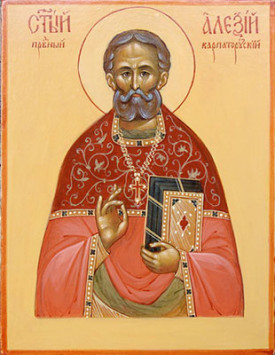 The feast day of St. Alexis Tovt is on 7 May.

Alexis Tovt was born in the family of Greek Catholic priest near Prešov (modern Slovakia) in 1854.

He received education in Catholic and Greek Catholic seminaries, also in the University of Prešov. He spoke several languages.

In 1876 Alexis became the ordained priest. After three years he lost his wife and child.

Being a priest Alexis also was the secretary of bishop of Prešov, chief of diocesan office, professor of the seminary and responsible person for orphans. All of it was useful for Alexis’ future ministry in America.
In 1889 fr. Alexis arrives to Minneapolis and becomes dean of local Greek Catholic community. In 1890, 8 from 10 Greek Catholic priests headed by fr. Alexis gathered in Wilkes-Barre (PA, USA) and decided to appeal to Russian bishops. As a result, in 1981 by support of bishop of Aleutian Islands Vladimir father Alexis together with his flock (381 persons) entered to Russian Orthodox Church. Fr. Alexis became a dean and also had to take care on communities of Chicago.

First years of fr. Alexis’ ministry were difficult. He was accused in treason of his faith for profit. In truth fr. Alexis not only did not received financial support from Church hierarchy, but worked in bakehouse.

The majority of earned money priest gave to the poor and needy among whom also were priests who had many children.

Fr. Alexis had a gift of preaching which was highly estimated by American hierarchs. So they started to send him for missionary labors into the medium of emigrants with Slavonic roots. Having conversation with Roman Catholics, Greek Catholics and Protestants he always emphasized that true salvation is only in the Orthodoxy.

The labors of father Alexis Tovt made great contribution into spreading and strengthening of the Orthodox Church on the American continent. After more than ten years of his activity to the Orthodoxy were converted 17 Greek Catholic parishes and 29000 of their believers. For such missionary work father Alexis some time was called “Father of American Orthodoxy”.

For these labors father Alexis was conferred the highest Ecclesial awards. In 1909 he become the protopresbyter.

In the last year of his life father had health complications and in 1909 he passed away peacefully.

In 1994 father Alexis was canonized by the Orthodox Church in America. His honored relics are in the church of St. Tikhon of Zadonsk, St. Tikhon monastery, South Canaan (PA, USA).