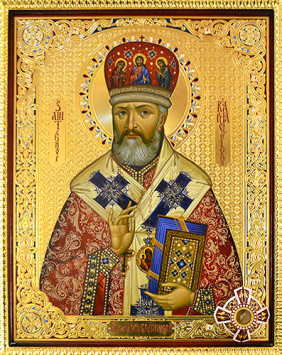 Day of Remembrance of the St. Raphael of Brooklyn celebrates by the Church on 27 February.Raphla Hawaweeny (secular name of this saint) was born in 1860 in Beirut (Syria), in the family of Orthodox believers.

He received an education in local Orthodox school and in Seminary of Halki Island (Greece) in 1886.

Raphla had obedience to Antioch Patriarch Gerasimos II in Damascus. In 1878 young man become a monk and ordained deacon.

In 1888 fr. Raphael started his formation in Kyiv Theological Academy. In 1889 he become an ordained priest and promoted to be Archimandrite. For the next 5 years he had obedience as a dean of town church of Antioch Patriarchate in Moscow. Between 1894 and 1895 he was a professor of Kazan Theological Academy.

Since 1895 the American period of St. Raphael’s life has begun.

In 1980s Arabic-speaking people from the countries of Middle East, who lived in New-York, established Syrian Charitable Association. In that time the Church on the American Continent was headed by the clergy of Russian Orthodox Church. Members of mentioned Association requested for spiritual father who would be able to speak and pray in their native language. Fr. Raphael was chosen for that. In 1895 he arrived to US and was assigned to be a spiritual mentor of Arabian and Syrian faithful.

In 1904 fr. Raphael was elected to be the vicar bishop of Aleutian Diocese. So he becomes the titular bishop of Brooklyn. The consecration was performed by Saint Tikhon (Bellavin), Bishop of Moscow, who after become the Patriarch of Moscow. This event was in St. Nikolaos Cathedral of Brooklyn, which was established by Archimandrite Raphael.

Bishop Raphael was the enlightener with the great experience in that sphere; he had serious theological training and spoke Russian, Syrian and Arabian. St. Raphael inspired the implementation of English as a language of worship in order for further fruitful development of Syro-Arabian mission. It was made because of young Syrian generation studied in American schools and ceased attend the Orthodox churches.

In the end of 1912 because of his tireless labors St. Raphael got an impaired cardial function. After long disease the Bishop rested in God in 1915.

That time the Antioch mission contained 30 communities with over 25 thousands of believers.

Canonization and glorification of St. Raphael was committed in 2000. Festive mass was at St. Tikhon monastery of Orthodox Church of America.

In 2015 the ROCOR widely celebrated the centenary of St. Raphael’s rest. On that occasion the St. John the Baptist Cathedral of Brooklyn has received as a gift the particle of the holy relics of St. Raphael.