St. Jacob (Netsvetov) – The Enlightener of peoples of Alaska 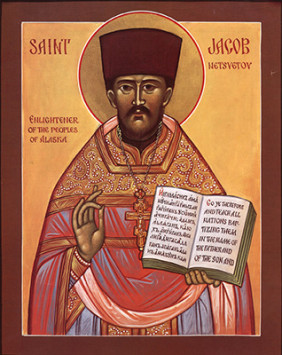 St. Jacob (Netsvetov) was born in Alaska in the beginning of XIX c., but he had Russian roots. He was an Alaskan Creole which means that his father was one of Russian colonists from Irkutsk, but mother was Aleutian. Jacob was educated in Irkutsk and married on 1927. Soon he become ordained priest – first among other native Alaskans.

It should be noted, that righteous Jacob was a pupil of Metropolitan Innocent (Veniaminov), also known as “The Apostle of Siberia and Alaska”.

Since 1828 young priest started his missionary ministry of Alaska, and he had been doing it for twenty years.

For that time St. Jacob has done many things. He built the church devoted to the honor of St. Nikolaos the Wonderworker in Kwethluk and that parish keeps its activity until today. For residential population St. Jacob translated the text of the Holy Gospel to Unangan.

We also should mention about the circumstances of St. Jacob’s ministry. Local climate is pretty inclement, the mail delivered once per year; in the very beginning there were no church. In such severe climate young priest spent a lot of time in missionary journeys and because of that his health has been broken. When St. Jacob’s wife passed away it become very ordeal for him and after that father Jacob decided to become a monk in Irkutsk. But it’s never happened, because it was impossible to find a substitute person for such difficult walk of life, and this holy man proceeded to carry his diligent obedience until his dying day, living as a monk.

In 1844 St. Jacob was sent to a more severe place of pastoral ministry – continental part of North-West Alaska, where he enlightened residential Eskimos. The preaching of Evangelical Truth among the hard-to-reach people of Alaska is the most great affair of St. Jacob (Netsvetov).

Canonization and glorification of this righteous man was committed by Orthodox Church in America in 1994. At the same time St. Jacob has been called “The Enlightener of the peoples of Alaska”.

Day of Remembrance of the Saint Jacob is on 26 July.