Home » Articles » Miraculous Icons » Our Lady of the Gate of Dawn

Our Lady of the Gate of Dawn 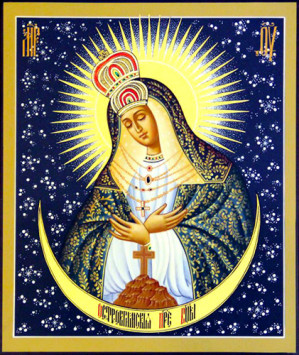 Our Lady of the Gate of Dawn is one of the most well-known and main Lithuanian shrines, venerated both Orthodox and Catholic believers. Everyday many thousands of people from all over the world prays in a front of it. The day of veneration for this icon is on 8 January.

The name of the icon goes from the main sights of Vilnius – the city gate known as “Gate of Dawn”, and the icon is above the gate. Another name of icon is “Vilenska” because of old name of city – Vilno.

The size of the icon is 6, 6 × 5, 4 feet. The painting is on oak wood, consisted of a few planks. This icon belongs to rare iconographic type when the Theotokos is without the Infant Christ. The Analysis of panting technique and paint formulation indicates the icon created in second half of XVI c. and most likely by Italian artist.

The figure of Mother of God covered under the silver with a gilding riza (except face and hands). The head of Virgin Mary is adorned with two crowns: one represents Her as Queen, another of Queen of Poland. The large crescent moon of silver located right beneath Our Lady; this is offering made in 1849.

The first certain literature mention about Our Lady of the Gate of Dawn was in 1671, when the icon was festively moved to a new chapel. At the same year first miracle occurred: the life of a little boy was saved. The veneration of this icon became common in first half of XVIII century; then was set the festive day of Guardianship of Our Lady.

The icon was moved to the chapel above the city gate in the beginning of XVIII c. In 1849 the crescent moon of silver was placed right beneath Our Lady as a sign of gratitude.

The icon of Our Lady of the Gate of Dawn was crowned in 1927. In the next year it was placed to the metal ark aiming protect the shrine from fire and thieves.

There are several versions of appearance of this icon in Vilno. One of them states that the icon was miraculously revealed at the Gate of Dawn in 1431. Another says that this shrine was sent from Byzantine by Emperor John Palaiologos as a gift to Prince Algirdas. According to another one hypothesis the icon was created in 1619 in one of workshops of Krakow. In 1920s was a popular guess that features of Our Lady are very similar to Polish Queen Barbara Radziwiłł (1520-1551). Some scientists ascribes making of icon to brush of some Italian artist of XVI c. In 1990 Polish researcher Mary Kałamajska Saeed in her work argues that iconic paintings of Vilno and Krakow painted from a common source of the authorship of Flemish painter Marten de Vos. In her opinion icon “Our Lady of the Gate of Dawn” was created in the capital of Lithuania in 1620s-1630s.

In a front of this icon believers are prays for protection of home from an evil angels, for patronage of God, protection of family, for happiness and mutual matrimonial love and in many other cases.

Our Lady of the Gate of Dawn обновлено: September 16, 2015 автором: maximus