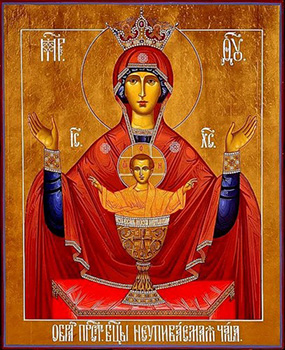 The icon of Mother of God called “Inexhaustible Chalice” is the one among the most venerable wonderworking icons in Russia. The day of veneration for this icon is on 18 May.

This icon belongs to the Orans type. Virgin Mary depicted with lifted up hands; the Infant Christ stands in the Chalice and blesses by both hands.

Appearance of the icon

The miraculous appearance of the icon was in Tula Province in 1878. One peasant had an addiction to the alcohol for a long time and even lost the ability to walk. Once he saw in his dream an old man who commanded to go to Serpukhov monastery of Presentation and to request for prayer service in a front of icon “Inexhaustible Chalice”. However, the man did not believe immediately and went only after next two visions.

When sick man arrived to cloister he told about what was happened to him. But inhabitants didn’t know about such icon. After a long search was found the icon, marked from backside: “Inexhaustible Chalice”. The peasant recognized the founder of the monastery schemamonk Barlaam as the old man whom he saw in his dreams. After the prayer service the sick man got healed of alcoholism and of legs sickness.

Eventually, the story about the healings was enriched by many new testimonies. The brotherhood for sobriety of St. Alexander of Nevsky was founded in the city under the church of St. Alexander. In that church prayer services and akathists were performed for everyday. Though in Serpukhov the icon became especially venerable, but the veneration did not spread beyond the Province.

The loss of Shrine

When in 1920s the spiritual activity of Monastery of Presentation was discontinued, the icon was moved to the Cathedral of St. Nikolaos. At that time the veneration of the icon ebbed. According to the request of believers the ruling bishop of Serpukhov Manuel blessed to paint 8 copies from the original, thereby renewing the veneration. In 1929 soviet government closed the Cathedral, and all shrines were burned. “Inexhaustible Chalice” together with the copies disappeared completely.

The veneration of the icon today

The prayerful veneration of the shrine was renewed in the late 1980s. In 1992 was painted the new one “Inexhaustible Chalice”, and today it is pretty well-known. With the lapse of time the icon was decorated by a precious riza. In 1993 this icon was consecrated in Vysotsky monastery of Serpukhov, and after the news about miraculous healings a lot pilgrims began to visit that cloister. In 1996 in the monastery of Presentation (the place of appearance of “Inexhaustible Chalice”) was consecrated a new copy of the icon. In 1997 the veneration for this icon was included to the calendar of the ROC, and it became the nation-wide recognition of “Inexhaustible Chalice”. In 2002 in Serpukhov were resumed traditional pre-revolution prayer services and akathists for healing of alcoholism.

Today many churches and many homes have the icon “Inexhaustible Chalice”. In a majority people prays for psychical and physical healing for persons who suffer from alcoholism and drug addiction.