The icon of Theotokos called “The Assistant in Childbirth” 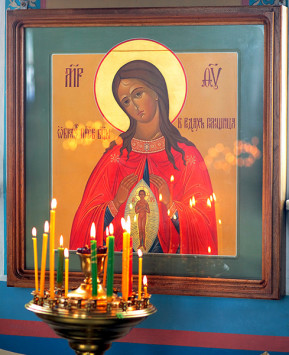 Since antiquity faithful women during the childbirth pray to Our Lord Jesus Christ and to His Most-Holy Mother. And today a lot of God-loving parents in their houses have the icon of Theotokos called “The Assistant in Childbirth”.

Many of mothers pray warmly, asking Virgin Mary give an assist, because She gave birth to Her Son in painless. And who ever would appeal, making it with a pure soul and believing heart, that person will have the joy, solution and protection from Heavenly Mother. Also in a front of this icon people pray for conceiving the baby, for be healed from infertility, for blessed birth of healthy child. We may often to see the icon “The Assistant in Childbirth” near the bed of future mother, as well as in maternity ward. After prayers in a front of this icon even maternal dystocia is successfully resolved.

There are three known variations of that icon:

– Ancient one, where Mother of God depicted with a covered head, standing and lifting up hands. The Infant Christ depicted on Her chest;

– Modern one, where Mother of God is without head covering, Her hair is loose and hands are on Her chest. The Infant Christ depicted without robe and little bit lower from Mother’s hands;

– Another one type is represent by icon called “And the Word was made flesh” of Albazino, on which Theotokos with a covered head and Her hands are lower the Infant Christ, Who depicted without robe.

The wonderworking icon “The Assistant in Childbirth” was glorified in Serpukhov, near Moscow, in 1993. Now that shrine is in the Cathedral dedicated to St. Nicolas the Wonderworker. In 2005 the ancient icon (XVIII cent.) was found in Khabarovsk.

For last two decades many churches devoted to honor of icon “The Assistant in Childbirth” were built in many cities.

The day of veneration for this icon is on 8 January.

The icon of Theotokos called “The Assistant in Childbirth” обновлено: September 15, 2015 автором: maximus