Our Lady of Kazan 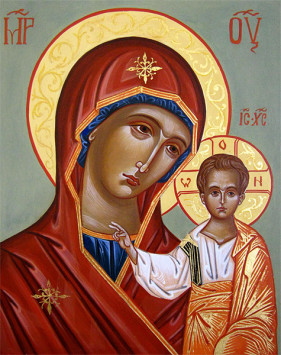 Theotokos of Kazan is the first among the most venerable icons of the Russian Orthodox Church. 21 July and 4 November are the veneration days of this icon.

Our Lady of Kazan belongs to iconographic type of Orans, which means “One who is praying or pleading”. The prototype of this icon was in the Church of St. Mary of Blachernae, Constantinople.

The discovery of the icon was in Kazan in 1579; when fire destroyed the part of city, Mother of God appeared to nine-year-old girl named Matrona in her dream. Theotokos commanded to dig out Her image in one of places, harmed by the fire. In fact, in that place the icon was found. With the lapse of time that day has become the Churchwide Russian feast. On the place of discovering of the icon was founded the Monastery of Theotokos, and Matrona became the first inhabitant of it (her monastic name was Maura). In the measures of diocese the icon was venerated until 1630. The miracles started to happen even during its moving to the church, when two of participants of Procession were healed from blindness. At same year the copy of the icon was sent to Ivan the Terrible.

However, the nation-wide veneration of Our Lady of Kazan was established later and was related to events of so called “Time of Troubles” 1611-1612. On September of 1612 the military forces under the leadership of prince Dmitry Pozharsky besieged the polish garrison, which has invaded to Moscow Kremlin. Russians had the copy of icon of Kazan. In two months the interveners has capitulated and the city was free. The icon was moved to parochial church of Pozharsky family – The Church of Presentation on Lubyanka. Also prince Dmitriy initiated in Moscow the establishment of feast dedicated to veneration of Theotokos of Kazan.

The ultimate nation-wide veneration of Our Lady of Kazan was established in 1649 on the occasion of birth of heir to the throne Dmitry Alexeyevich on the feast of this icon in 1648. Then Tsar Aleksey Mikhailovich ordered to celebrate this day across the country for all years.

For the next 150 years a dozen locally venerated copies of Theotokos of Kazan spread across a lot of Russian cities. In XIX century this icon was venerated equally together with ancient icons of Theotokos of Volodymyr and Theotokos of Smolensk. The history of relocation of the copies is very complicated and it is impossible to accurately recreate, so even then the location of the original was fairly unknown. Most of researchers believed that the shrine still remained in the monastery of Kazan. In 1904 the icon was stolen from the monastery. When the criminal was found he stated that he has burned the shrine. Later he repeatedly changed his evidences, saying that he sold the icon to Old Believers. In the Diocese of Kazan appeared one tail, which states that the last Mother Superior of the convent after several attempt to still the icon, became to hide the original for the night time, replacing it by the copy. Thus, according to tradition, a copy was stolen.

According to blessing of His Holiness Patriarch Kirill, since 2011 the copy of Our Lady of Kazan delivered to ISS and now is in the Russian part of it.