Home » Articles » Miraculous Icons » The Icon “Our Lady of the Sign” 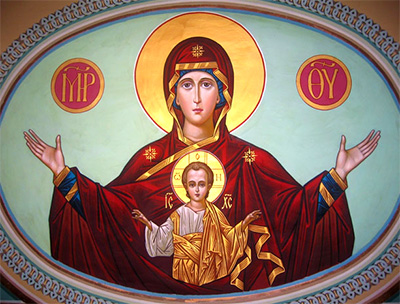 The Icon “Our Lady of the Sign” is one of most venerable Russian icons. It became the sign of mercy of Heavenly Mother to a mankind. The festive Day of the icon is 10 December.

The icon belongs to iconographic type of “Orans” (which means “The one who prays”). Mother of God depicted with a lifted-up hands; the Infant Christ is blessing and He depicted on a golden medallion. The size of the icon is 1,9×1,7 feet. From the backside of the icon depicted the parents of Our Lady: St Joachim and St. Anne, who prays in a front of Jesus. In XVI century the painting of the icon was renewed. There are only parts of Theotokos’ riza and region near the face of Christ remained from the ancient painting. The image from the backside is totally authentic.

The first testimony for the miracles of the Icon of the Sign belongs to the middle of XII century. In 1170 allied troops under the guidance prince Andrei Bogolyubsky came to city of Veliky Novgorod. Residential people began to pray for help because the enemy forces were significantly superior. The bishop of Novgorod John has seen a vision, in which he finds the icon of Mother of God in the church of Transfiguration, and he have to make the procession with it all around the city wallsDuring the procession the enemies threw a lot of arrows and one of them hit the face of Virgin Mary. Immediately the tears came down from the eyes of the image, and great fear and horror were spread among the assailants. The army ran away and the inhabitants of Novgorod chased the enemies, and after celebrated the victory. The celebration of honor to this icon was established in the same century, and the Church celebrates it even for today.

In the middle of XIV century the wonderworking icon was moved to the church of the Sign of Novgorod.

After violent events of revolutions of 1917, the icon became a part of collection of Museum of Novgorod. In 1991 the shrine was returned to Russian Orthodox Church.

Many copies were made during the centuries-old history of Orthodoxy on Rus’. Some of them are venerated as wonderworking and called by the place of glorification. For example, Abelskaya Icon, Kursk Root Icon, Seraphim-Poltavskaya Icon, Dionysios-Glushitskaya Icon.

The Icon “Our Lady of the Sign” обновлено: September 18, 2015 автором: maximus