August 14 – The Procession of the Venerable and Life-Giving Cross 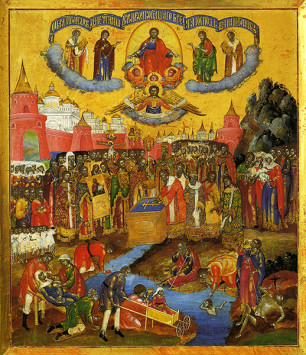 This festive occasion appeared in IX century in Constantinople – the capital of Byzantine Empire. Such big and populous city with a developed water supply system usually had some problems on summer, especially on August: the water corruption at in ground tanks and, as a consequence, diverse epidemics and illnesses.

At that time was established following tradition: Constantinopolitan Patriarch carried out the Holy Cross from imperial treasure house. That Cross contained a big piece of True Cross. It was set up in Hagia Sophia and in front of it were performed consecrations of water. After that for 14 days was a Procession of the Holy Cross all over the city. On the way the shrine was dipped into the wells and tanks, making the water consecrated. All of this gave a support to strength the faith, to restore vital and spiritual strengths of believers. The Procession of the Holy Cross continued to the Day of Dormition of Virgin Mary, and then the shrine was deposited in the Cathedral for veneration. 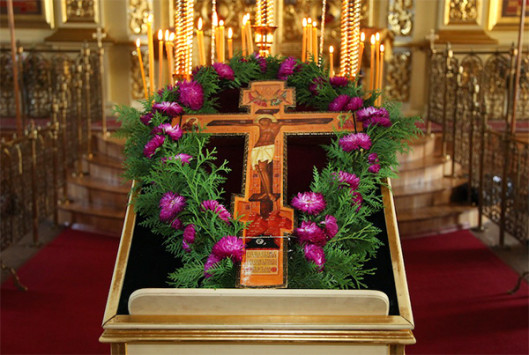 That feast has come to Kyivan Rus at the end of XIV century, together with Hierosolymitan Typicon.

In modern liturgical practice the Holy Cross is carrying out the day before feast during the Vesper, so believers may venerate it prayerfully. The consecration of water, which is prescribed, is performed after the Divine Liturgy. According to tradition, honey and herbs are consecrated as well. That is why another name of that feast is “Wet” or “Honey Spas”. Even though the consecration of honey and herbs is popular tradition and has no theological background, it still exists similarly to consecration of fruits on the feast of Transfiguration.

August 14 – The Procession of the Venerable and Life-Giving Cross обновлено: September 15, 2015 автором: Alexander