It was built over 100 years ago and the name of its heavenly patron – St. Nicolas, is not an accident. A lot of Orthodox people, who came to American continent, prayed to that Saint for refuge and emolument. St. Nicolas is one of the most venerable Saints in our country. Perhaps, there is no house without the icon of St. Nicolas. Russian usually took such icon to a pilgrimage, journey or sailing.

The story of the Cathedral of New York shows us the year 1905, when new community was founded. It was located on a ground floor of building on 2nd Avenue, 323.

With a lapse of time the parish became to grow and all the parishioners do not fit into small church. A construction committee was founded and it decided to create a new building. In 1899 the community bought 700 square meters of land on 97th Street. According to plan, there supposed to be prayer house for 1 000 persons, lecture rooms for Sunday school, rooms for clergy and meeting room. Architect Bergessen was responsible for the project.

In 1900 the program for collecting money was started. By the way, Emperor Nicolas II made donation for 5 000 roubles for that charitable work, and father John of Kronstadt gave 200 roubles.

On May 22 of 1901, the day of Translation of the St. Nicolas relics, took place the solemn laying of the Cathedral. Church was consecrated on May 23 of 1903.

In 1905 the residence of a bishop was moved from San Francisco and St. Nicolas church became the Cathedral and at the same time the spiritual center of Russian Orthodoxy in USA.

In 1954 the roof, domes and crosses were reconstructed. 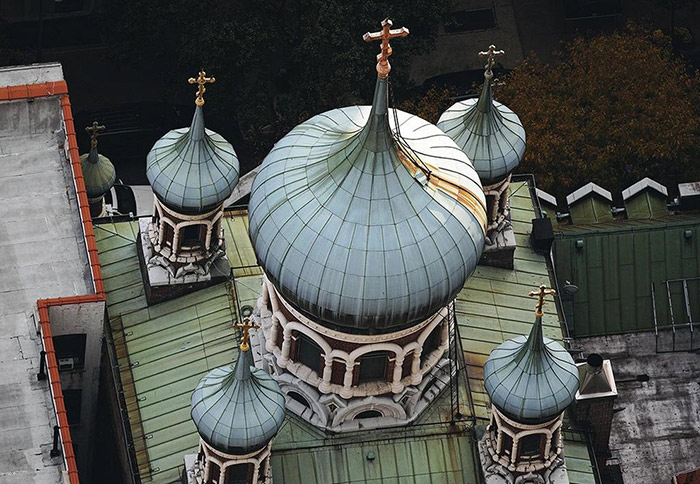 In 1970 the Metropolitanate of North America has received the status of autocephaly from Moscow Patriarchate. Some communities did not want to enter under jurisdiction of the new-created Church, so they created Patriarchal parishes.

In 1973 St. Nicolas Cathedral has received the status of Landmark of the city.

In 2000 a new restoration work was began. Particularly, the interior was painted in a new way. The consecration of the new-painted church was on November of 2003.

The church is built in the style of Moscow Baroque. The top of the church is decorated by five domes. Total footprint of building is 15 × 26 m. The walls are decorated with frescoes.

Besides the main altar of St. Nicolas there is the side altar of Nativity of Theotokos.

The gilded oak iconostasis is in the middle, the icons of it are made by A. Slavtsev. The inner painting was made by two artists from Italy and Russia – Santino and Sokolov.

For the century of it existence the Cathedral became a place of prayer. A lot of believers are coming to venerate shrines. It is the chest with holy relics of several Sts. Venerable fathers of Athos Mount, which was brought in 1901, the icon of St. Tikhon of Moscow with a particle of relics, which is a gift of Patriarch Alexy II.