Home » Articles » Shrines of America » The Hermitage of the Holy Cross, Western Virginia

The Hermitage of the Holy Cross, Western Virginia 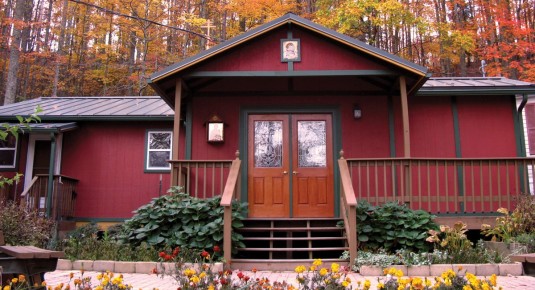 The Hermitage of the Holy Cross is under jurisdiction of Eastern American Diocese of ROCOR. The cloister is located near the Appalachian Mountains, WV. It surrounded by peaks and forests, and that allows to inhabitants to be more concentrated on prayer.

The community was established in 1986 by hieromonk Kallistos (†1992) in House Springs, MO, and remained there for 14 years. In 1999 the number of brothers was doubled and there were no available monastic cells. Thus, an offer of land was made to the Hermitage and in moved to West Virginia. It took place in 2000.

Today in the hermitage are twenty monks, novices and monastery workers. The main pastime in the monastery is a prayer, so the day begins there by Midnight office at 5 o’clock.

The spiritual center of hermitage is the church. In 2000 the first small church was built and today it cannot hold the all pilgrims. So now there is some plan to build a new big church.

Every day monks performs the prayer service to St. Pantaleon the Healer, prays for those who sick and suffer.

During the day everybody works for glory of God in order to keep the hermitage. And every novice has a different obedience. One third of monastic works in workshops for manufacturing a labdanum according to ancient Athonite tradition. Also they manufacture a different type of soap, candles etc. Another one part works on at monastic farms, proving for refectory a milk of goats and cows, eggs, vegetables, mountain honey, coffee and another fruits. All of it can be brought in the church shop. The funds of sale are an important component of life of the monastery.

Also the inhabitants are involved in construction work, cooking, office work and other obediences, related to life and functioning of the hermitage.

On a place the monastery moved to in 2000, almost was no infrastructure. But today a several projects are developed for the future. This is a renewing of the roadway, water supply system, electrical systems, gas pipeline, garages, storehouses for instruments and building materials, planting the trees.