Home » Articles » Lives of the Saints » Sts. Carpus and Alphaeus of Seventy Apostles 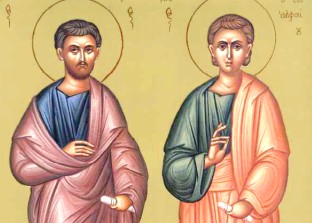 According to church calendar 8 June is the Remembrance Day of Sts. Carpus and Alphaeus of Seventy Apostles.

We do not have many testimonies about life of St. Apostle Carpus. It is known that he accompanied to St. Apostle Paul and sometimes delivered St. Paul’s letters to recipients.

St. Carpus mentioned in the Second Epistle to Timothy (chapter 4). It tells: during the sudden arrest of St. Paul in Troas (64 B. C.) he left some of his things – books and phelonion, in the house of his follower Carpus.

Hagiography say that Carpus preached the Word of God on Crete and in Thrace (the region of Balkans; today this is the territory of Bulgaria and Greece). Finally he became bishop of Beroea. For the years of his ministry he converted to Christianity a lot of pagans.

There are two versions of St. Carpus death. One says that St. Apostle peacefully reposed in Beroea. Another indicates martyrdom during Emperor Nero’s reign.

Much less data about St. Apostle Alphaeus. He was born in Capernaum (Galilee), where he gave birth and brought up his well-known sons – Sts. Apostles James and Matthew – the author of one of Gospels. According to some Church Tradition, Sts. Martyrs Abercius and Helena also were children of St. Alphaeus. There is unknown where exactly St. Alphaeus preached the Gospel. One of traditions says about peaceful repose of the Apostle.