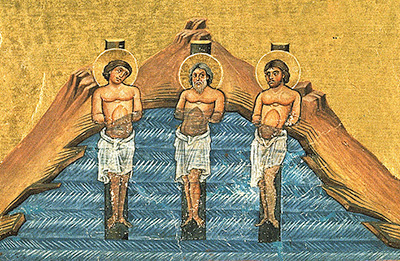 “I ask you, all-worthy fathers, to remember Sts. Martyrs Inna, Rimma and Pinna in dismissal prayers because they have to be considered as saints of Crimea. They are very ancient martyrs”. The text of this document is in archive of Simferopol and it was signed by Saint Archbishop Luka (Voyno-Yasenetsky) in 1950.

The Festive Day of these saints is twice per year: 2 February and 3 July (Translation of the Relics).

Sts. Martyrs Inna, Rimma and Pinna were born in Great Scythia (today the the territory Crimea). They became the pupils of St. Andrew the First-Called and always accompanied him during his evangelical labors in Scythia. The Apostle has baptized Inna, Pinna and Rimma, and ordained them to priesthood. They were sent for preaching among Greeks and other people who live in the Bosporan Kingdom. On the way the Martyrs preached the Gospel and have baptized a lot of pagans.

For their efforts to spread Christianity, Sts. Inna, Rimma and Pinna were captured by order of Prince of Chersonese, who was a pagan. The governor caught three companions and required to make sacrifice. When they refused, Prince commanded to hammer in the logs to the bottom of iced river, and to bind the Martyrs to it. Being in severe cold they reposed in God.

Local Christians secretly buried the corpses of three Martyrs. In peaceful times for Christianity, the Relics were moved to the local Cathedral. After seven years since their repose the Saints appeared in the dream to Bishop Gedtz and commanded to translate their relics to port of Alisk (“The Dry Shelter”). Professor E. Golubinsky is identifying that place to the modern city of Alushta.

Sts. Martyrs Inna, Rimma and Pinna considered as patrons of Crimea and the first martyrs of Rus.