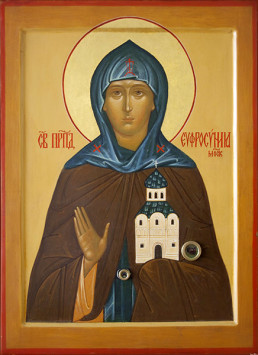 Saint Euphrosyne of Moscow was born in the family of Prince Dmitry of Suzdal. She was baptized with the name of Eudoxia and lived in the severe time of Russian struggle against Mongol and Tatar yoke.

In 1366 Eudoxia married Prince Dmitry of Moscow who later was called “Donskoy”. The princely family was under the spiritual nourishment of St. Alexis of Moscow and of St. Sergius of Radonezh. Spouses were blessed by God, having eight sons and four daughters.

Happy matrimonial life was interrupted by sequence of disasters. Epidemy in Moscow, violent fire, siege of Lithuanian troops this is an incomplete list of the suffering encountered by young princess and her people. Seeing all this, Eudoxia prayed to the Lord about the relief of plight of the Principality.

Next problems were even more serious. Firstly prince Dmitry went to Golden Horde for princely Jarlig, then to Battle of Kulikovo, and little bit later Moscow was looted by Tatars. Also her son Vasily was captivated.

Perhaps, the most difficult ordeal happened in 1389 – Eudoxia have lost her beloved forty-year-old husband Dmitry Donskoy. At this time emerged Old Russian known writing: “Lament of the Grand Princess for deceased husband.”

After her husband’s death, the widow princess began to live by ascetic life, hiding it from the environment. She garbed chains under the luxurious clothes and was fasting. For the remembrance of her husband Holy Woman donated a lot of money for the monasteries and dispensed alms to poor. On the place where she met Dmitry Donskoy after Battle of Kulikovo, the princess founded the Monastery of Ascension.

In 1395 according to advice of princess the “Our Lady of Volodymyr” was brought to Moscow and it gave support to withdrawal of troops of Timur the Conqueror.

In 1407 St. Michael the Archangel came to righteous princess and announced that she will die soon. Thus, princess was tonsured to a monk quickly with the name of Euphrosyne. But before tonsure she has made a miracle by healing a blind man.

St. Euphrosyne died being 54 years old, and according to last will of her she was buried in the Monastery of Ascension, which was constructed by her order.

The holy relics of princess were there until 1929, when monastery was destroyed by soviet authorities. Then the shrine was moved to Cathedral of the Archangel of Kremlin. In 2008 the holy relics were moved to the side chapel of St. Varus the Martyr.

The Remembrance Day of St. Euphrosyne is 20 July. 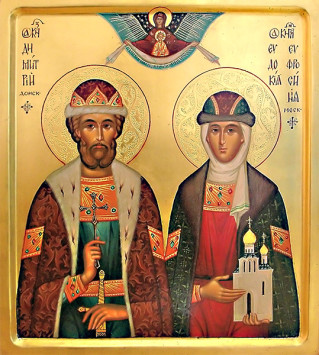