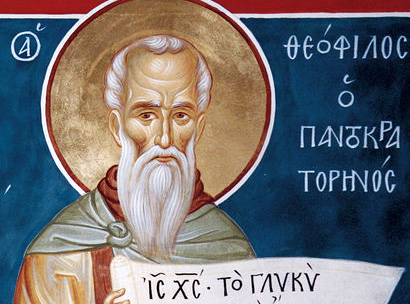 Saint Theophilus the Shedder of holy ointment lived in the end of XV – beginning of XVI century. He was born in Macedonian city of Zikhy to a faithful family. His parents provided to him a worthy education and being youth he became a wonderful copyist. At the same time the boy read and studied the Holy Scripture.

In young age he left paternal house and was tonsured to a monk with the name of Theodosius. Over time young monk was ordained to priesthood by bishop of Reygana Acacius. Then St. Theodosius traveled and taught Christians, edifying by the word and personal example. It was particularly necessary because in that time the Balkan countries were under the Turkish yoke. According to request of Constantinopolitan Patriarch Niphont father Theodosius together with bishop Acacius went to Egypt to Alexandrian Patriarch Joachim. There the holy man became a witness of all miracles made by Patriarch for preaching the Holy Gospel to Jews and Muslims. After arriving back to Constantinople, St. Theodosius gave to a new Patriarch Pachomius the letters from Alexandrian, Antioch and Jerusalem Patriarchs. Pachomius offered to Theodosius position in Patriarchy and for many years he was a Notary and Exarch of a Great Church.

But desiring quiet monastic life, fr. Theodosius left his high position and arrived to Holy Mount of Athos, where he worked in Monastery of Vatopedi. After a long period the holy man came to Monastery of Iviron where he started to copy the manuscripts. Over thirteen his works still are at the monastic library.

Theodosius led a virtuous life, stories of which spread everywhere. Constantinopolitan Patriarch Theoktist offered the episcopacy to the monk, but Theodosius desired solitude, so he refused. Soon enough Athonite was tonsured to a Great Schema and became the anchorite.

Spending all the time in fast and prayer the anchorite became worthy to know the date of his death. Before repose St. Theophilus received the Sacrament of Anointing, spent his last day in silence and rested in God.

The pupil of Holy Man named Isaac tried to fulfill the last will of St. Theophilus and delivered his corpse to the forest to be devoured by wild beasts. But inhabitants of Pantokratoros monastery found the holy relics and brought it to the cloister. Making great efforts Isaac returned the holy relics and rut it in the church near his monastic cell. The relics of Athonite Holy Man immediately became fragrant and to began to shed the holy ointment, and for this St. Theophilus is called “The Shedder of holy ointment”.

The festive day of honor of St Theophilus is on 21 July. 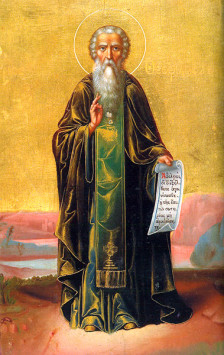