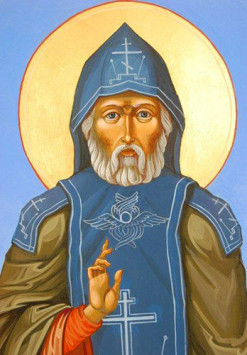 Theophilus lived in XIX century, but his name is popular among of many of residents of Kiev and orthodox believers who esteem memory of him even for today. The Orthodox Church celebrates on 27 July the Finding of Relics and glorification of St. Theophilus, and on 10 November the Day of his passing away.

St. Theophilus was born to the family of priest in the village of Makhnovka, Vinnytsia region. He was baptized with the name of Thomas. The Baby refused to eat mother’s milk. Then the mother, after hearing the superstitious neighbors and believing that her son was a ghoul, decided to get rid of Thomas. She ordered to housemaid to sink the boy and she threw him twice into the water, but waves carried him out to the bank. Then mother threw the baby by her own hands to the mill-wheel but it was stopped and miller carried out the unharmed boy. After unsuccessful attempts to convince his wife to remain the baby home, Thomas’ father have found to him a wet-nurse, and before dying he asked the miller to take care of boy. From the miller boy lived with a childless resident of the neighboring village. Later he moved from family to family, from house to house. So Thomas has known suffering since childhood.

Thomas was pretty differ among his peers in his love to prayer and to ecclesial worship. When the churchwarden discovered that boy’s uncle lives in Kyiv Brotherhood Monastery, he took Thomas away to that cloister. The young man was enlisted to first class of Kyiv-Mohyla Academy which was located in Kyiv Brotherhood Monastery. Thomas was diligent student and prayed much for his mother. In time she realized her offence, came to monastery and has begged Thomas for forgiveness.

Thomas became novice of Kyiv Brotherhood Monastery. Soon he was tonsured to a monk with the name of Theodoret. For other brothers he was an example, full of gentleness, humility and chaste. In 1834 was tonsured to a great schema with the name of Theophilus. But this holy man had bent to solitude and desired to live as hermit in the caves of Tserkovschyna tract, near Kyiv, but he received refusal.

Then Theophilus has shared the exploits of folly for the sake of Christ. Being sagacious, St. Theophilus gave spiritual advices to a lot of people, warning them opportunely against bad deeds and helping to improve morally.

Once the ascetic made the request to be moved to Hospital Monastery by Kyiv Pechersk Lavra, but instead of that he was moved to Hermitage of Holosiyevo, which was dependent to Lavra, and from there to Hermitage of Kytayevo.

Many prophecies of St. Theophilus are known. In 1852 he has warned Russian Emperor Nicholas I about the defeat in Crimea war, though it began only next year.

St. Theophilus also foreseen the foundation of three monasteries in Kyiv: Trinity Monastery of St. Jonas (founded 5 years after St. Theophilus’ repose), Hermitage of Transfiguration (19 years after) and Convent of the Protection of the Mother of God (36 years after).

St. Theophilus reposed in Hermitage of Kytayevo and was buried near the Cathedral of St. Trinity. He was canonized in 1993 and at the same year his honorable relics were found and moved to the Cathedral. In 2009 the shrine with relics was moved to monastic church dedicated to honor of Twelve Apostles. 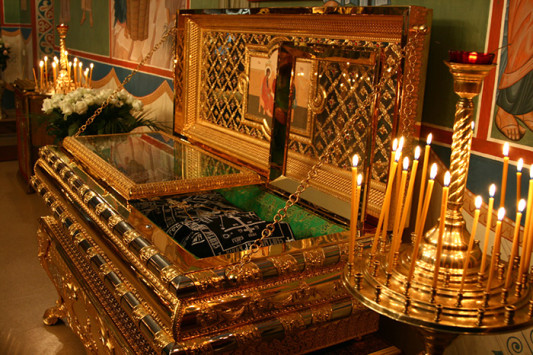