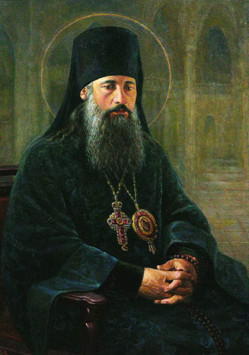 The Church celebrates the Day of Remembrance of St. Hierarch-Martyr Jacob (Maskayeff) on 29 July.

Jacob was born in 1879 to the family of peasants of Orenburg. In 1901 he graduated from the Seminary and was ordained to priesthood to a province church of Zobovo village. There fr. Jacob has built a new church and the parish school in the neighbor village. Also fr. Jacob was known because of his generous donates for charity.

In 1923 archpriest Jacob has been elected as candidate to a vicar bishop. He was tonsured to a monk and ordained to episcopacy by representatives of Renovationist Church, who had the highest ecclesial authority at that time. It should be noted that St. Hierarch-Martyr Jacob was loyal to St. Patriarch Tikhon, but he received an Episcopal ordination in Renovationist Church according to situation of that time.

At the meeting of clergy of Orsk City was raised the question about legality of Jacob’s ordination and people desired to have proofs of its canonicity. Bishop Jacob has sent the penitential letter to St. Patriarch Tikhon with the promise to stop the relations with the Renovationist Church. In the same year during the meeting with the Most Holy Patriarch he received the document which allowed him to fulfill the episcopal ministry.

In 1924 being the ruling bishop of Diocese of Orenburg, Jacob actively began to fight against the Renovationist Church. His personal authority was growing in the midst of clergy and believers and that was quite disturbing for the local authorities, so bishop Jacob became a “frequent guest” in the investigating organization. The Confessor rejected the complicity to the authorities and reconciliation with the Renovationist Church.

In 1925 the Diocese Administration, the Cathedral and a few churches has went under jurisdiction of schismatic bishop, who was upheld by the authorities, and Bishop Jacob together with some of clergymen was arrested. He was condemned to banishment for two years, so then he lived in Samara City.

After the exile bishop Jacob became the vicar of Diocese of Tver, and then of Diocese of Saratov. In that time he keeps standing on the position of Faith defense, also assisting to send a letters to the authority in order to keep the churches safe.

The arrests of 1930 and 1932 became a more difficult period of St. Jacob’s life because he was accused in the antistate activity.

In 1933 Bishop Jacob was assigned to the Diocese of Barnaul, and in 1935 he was promoted to Archbishop.

In spite of many sicknesses, Archbishop Jacob made the worship almost for everyday. Many people laughed and grumbled because Archbishop walked on the city in the ecclesial clothes.

In 1936 St. Jacob was arrested and imprisoned again. In 1937 the Hierarch was condemned to shooting, and was executed in the prison of Barnaul. Burial place is unknown.

The local believers honored their Bishop as saint even during the time of Soviet Union. In 1989 the Hierarch-Martyr was rehabilitated posthumously and canonized by Russian Orthodox Church in 2000.