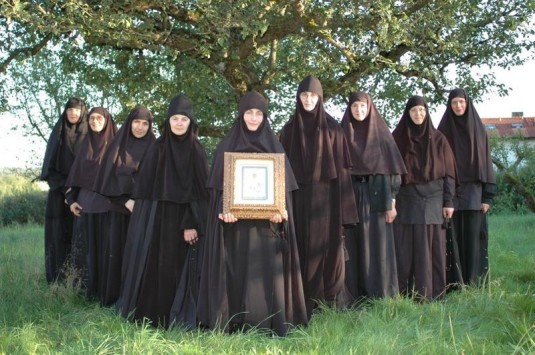 On 17-18 July, when Orthodox Church celebrates the Remembrance of Sts. Martyrs of Alapayevsk, the first German convent dedicated to honor of St. hosiomartyr and the Great Duchess Elizabeth has celebrated its patronal feast and tenth anniversary.

The festive worships were headed by Archbishop Mark – the ruling Hierarch of Berlin, Germany and Great Britain Diocese, who also provides pastoral nourishment for inhabitants of convent.

A lot of clergymen and pilgrims arrived for celebrations.

According to decision of Synod of Bishops of ROCOR, during the Divine Liturgy Archbishop Mark has promoted the nun Maria (Sidoropula) to Mother Superior.

St. Elizabeth skete is located in beautiful village of Buchendorf, 17 km away from Munich. Mother Mary stood at the origins of the monastery foundation. She found the appropriate building in order to establish shelter for nuns and pilgrims. The convent was founded in 2005. It was also served the first service – a thanksgiving prayer at the end of reconstruction work in the building. There are more than ten sisters at the convent today. After ten years the monastery was completely changed and it proceeds to develop. The sisters carry out different obediences. For example, under the monastery is a small prosphora bakery, which provides the liturgical breads not only for convent itself, but also for other parishes of Germany. St. Elizabeth skete since the day of foundation organizes an annual camp for girls, which attracts about 50 persons.